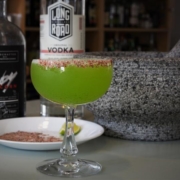 On the counter there was a big stone mortar and pestle, and a capped bottle with a vivid green liquid in it labeled “ARUGULA.” It was clear, this was going to be a different kind of drink.

“I had reason to make some green cocktails a couple of weeks ago and I started thinking about how you can do that and arugula makes a really nice syrup. You just blend it with some simple syrup and you get this beautiful bright green syrup that has some of that nice peppery arugula bite,” explained Tammy Coxen with Tammy’s Tastings.

That peppery bite was inspiration for selecting a spirit.

“Anything is better than green beer, Lester,” Tammy quipped.

But, it still didn’t really explain the mortar and pestle. In it were bright pink peppercorns and some salt.

“I thought it really needed a touch of salt and it also just needed a touch of something else,” Tammy said.” “That Wendy Peppercorn is a great spirit. But I wanted the peppercorns to be a little more punchy so I decided that it would be delicious and pretty if I were to put a rim on the glass.”

You’ve probably seen a bartender just dip the rim of the glass in some liquid and then dip it in some salt. That means salt is on the outside and the inside of the rim.

“Here I just carefully used a lime wedge to only put some moisture on the outside of the rim and then I rolled it through that salt and pink peppercorn blend. So if you turn out to not like the saltiness or you don’t like the extra pink peppercorn you’re not constantly bringing more of that back into your drink as you sip it. And for the same reason I also chose to only rim half the glass,” she said.

The Wendy Peppercorn is pretty intense, so Tammy decided to mix in some of Long Road’s Original Vodka. Add some arugula syrup and some lime juice and you’ve got a unique drink.

First, prepare your glass. Grind salt and pink peppercorn together in a mortar and pestle or blitz in a spice grinder. Place on a plate. Use a lime wedge to moisten the outside rim of a cocktail coupe, then roll in peppercorn salt. Set aside. Combine ingredients in a cocktail shaker with ice. Shake well and strain into prepared glass.

Make simple syrup by combining water and sugar in a saucepan and
heating until sugar is dissolved. Let cool. (Alternately, use 6 oz of
already-prepared simple syrup if you have it on hand.) Combine simple
syrup and arugula in a blender. Blend until well pulverized, but not
long enough to heat the syrup and turn it brown (15-30 seconds
depending on your blender). Strain through a fine mesh strainer and
store refrigerated.

This story has been updated to add the Arugula Syrup recipe. 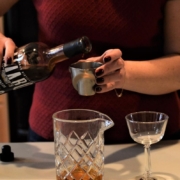 Tammy has been playing around with a new product from Long Road Distillers named Amaro Pazzo in a collaboration with Madcap Coffee.

“There are a lot of different distillers in the state making coffee liqueurs. There’s ample opportunity everywhere,” Tammy noted, adding that she loves the sense of collaboration.

“But, what I really love about Amaro Pazzo is that it took coffee liqueur to a whole new level by incorporating these amaro elements,” she said.

Amaro is a category of liqueur. Historically, amari come from Italy. It seems as though every little town has its own amaro. Most of them are intended as an after dinner drink, a digestivo.

“They are often quite bitter, usually somewhat sweet,” Tammy explained. They include lots of botanicals and tons of interesting flavors.

Tammy was surprised that Amaro Pazzo’s coffee taste is not the first thing you note when taking a sip.

“There’s some orange peel in here so you get a little citrus up front. Then the gentian and wormwood that they’re using as bittering elements really come through. The coffee is actually on the finish,” she said.

She’s been experimenting to see how the new amaro might be used in a cocktail. Sticking with the ‘after dinner’ theme, she decided to concoct a night cap and calls it “A Grand Night” in honor of that Grand Rapids collaboration.

Combine all ingredients in a mixing glass with ice. Stir to combine. Strain into a coupe cocktail glass. 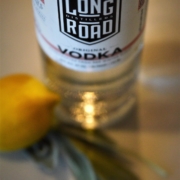 The Cheers! cocktail this week comes with lots of flavor, but none of it from the alcohol in the drink.

“For me, cocktails are all about the interplay of flavor,” said Tammy Coxen of Tammy’s Tastings.

Vodka brings nothing to the glass as far as flavor is concerned.

There’s an advantage if you have a drink that already has great flavors: vodka doesn’t interrupt the ingredients as they play off of each other.

This drink is called the Ramona. Tammy found it on the Internet years ago. If you look for it today, you’ll find ingredients with gin, white rum, tequila, and the other non-alcoholic ingredients might include grenadine and mint instead of this recipe. But, for fall, this Ramona is perfect.

“It’s a fall drink that everyone can appreciate, even if they’re not a cocktail snob like me,” Tammy quipped.